As it would happen, the Garcia connection to Cripe guitars would continue well past the loss of both musician and luthier in the hands of yet another Bay Area six-stringed master of the lyre, Steve Kimock. The story of how he came to own two of the surviving Cripe guitars is another threaded through with charity and magic.

First, the disposition of the two instruments in question: Adam Palow, mindful both of his friendship with Steve Cripe as well as the legacy of the fine craftsman’s work, felt compelled to visit Theresa and see about what remained of Steve’s guitar collection. Upon seeing his reaction to holding ‘Teak’ (or ‘No. 6’ as Cripe would have called it), she seemed to get a flash that Adam should finish the guitar, which in his words surpassed his abilities. 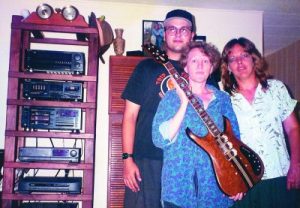 Adam began paying her in modest installments that started with the money in his pocket. She would pay a visit to him the next year, 1997, bringing with her not only the still-unfinished Teak, but Ebony, Tribute, Eagle and another Irwin-shaped guitar with oval inlays.

After leaving the guitars with him to use during a recording session for a few weeks, Adam also came away impressed with Ebony.

During their next visit for him to return the guitars to Trilby, FL, Adam paid off Teak and made a down payment on Ebony. Theresa let him take both back to his home in California, where they remained—if not quite in his possession.

TEAK – Its name, unofficial or otherwise, is no misnomer: constructed from rare birdseye teak on top and back with a Brazilian rosewood core, Teak features a neck fashioned from maple laminate and an East Indian rosewood fretboard. One of the hardest woods in the world and resistant to warping from dramatic environmental changes, Cripe likely became adept at using teak during his boatbuilding era of doing fine trim and decorative work on yachts.

After Cripe’s death, Palow found the guitar “taken apart” and missing its electronics, but knew that at one time it had been finished enough to be played. While owning it, however, he says, “I didn’t touch it.  All I did was buy a trio of DiMarzio Super 2 pickups, which I gave Ed [Giguere] when it was sold for Steve Kimock to use on The Other Ones tour.”

The Other Ones—a clever name for a band missing its leading light. Seeking a way to honor the legacy without exploiting the brand in a manner crass as many famous bands had and do to this day—continuing on in name only, without the human beings who first made the act possible and relevant—the surviving Dead, for spiritual and probably financial/legal reasons as well, would play together again under a variety of names and configurations while remaining identifiably themselves.

In their case, it made sense to continue—the catalog of remarkable music they produced was a true group effort, a gestalt of multiple virtuoso musicians, writers, thinkers and bohemians seeking a higher ideal. Sure, it could never be the same without Jerry, who possessed that ineffable X factor of so many charismatic artistic geniuses. But then again, he reportedly said much the same when original frontman Ron ‘Pigpen’ McKernon departed the coil, in 1973: “It can never be the real Grateful Dead again now,” Garcia is alleged to have remarked.

But life is strange, and the Dead do live on, even today as Dead & Company, fronted still by rhythm guitarist Bob Weir aided and abetted by younger artists like John Mayer and Otiel Burbage. In those days, however, the enormous show business economic engine that had been the Grateful Dead still struggled to find its footing in the wake of losing its charismatic, masterful lead guitarist and symbolic leader. After two years of ‘Furthur Festivals’ populated by various solo acts that delivered so-so fan and artist satisfaction, the 1998 season would see the first real attempt at reconstituting a close approximation of the old band. With Phil Lesh returning from a two-year break to join Weir, Mickey Hart, Bruce Hornsby and a variety of sidemen, including two gunslingers in the form of Kimock and Weir’s side-band guitarist Mark Karan ably, if nervously, attempting to fill enormous Jerry-sized shoes, the festival would lumber across the country and sell out many of the old sheds. It felt like the old days, a little bit. And a big part of this success was the sound of the band, in particular Steve Kimock’s clean Jerry-esque tone and style.

Kimock came of age hanging around San Francisco musicians, with Garcia’s playing as a formative influence among many. His selection by the former Dead made sense; the only problem was that Kimock didn’t own a guitar in his growing collection that could truly emulate the tone of the Irwins, or Cripes for that matter, that Jerry favored.

Cue Adam Palow—or rather, Ed Giguere. Ed, an old friend of Kimock’s, was not only “sitting pretty” in his words, but now thrilled to hear that after years on the club circuit with Bay Area improv stalwarts Zero, Kimock had gotten such a high profile gig.

Ed asked his old friend from the studio scene if he could do anything for him. With finding an appropriate guitar cited as Kimock’s number one issue, Giguere snapped his fingers and remembered a Zero show where Palow had brought the still-unfinished Teak to show around, including to a fascinated Kimock.

After tracking down Palow, who upon hearing the story was more than willing to sell the guitar for such a meaningful purpose—the Jerry thread.

With time running out before the The Other Ones summer tour was to begin, the first stop for Teak was once again the electronics bench of Gary Brawer, who set aside a Metallica guitar repair to quickly finish out the instrument with humbuckers, a new brass plate to replace Cripe’s wooden one, and other details. He stayed in touch with Kimock throughout the day, who gave specifics about how he wanted ‘the action’ set up. At the end of an eight-hour day, Brawer completed the work.

That same night Giguere rushed the guitar to the Club Front studio where Kimock was rehearsing. The guitarist took out the instrument and placed it on a stand. He and Giguere just looked at it for awhile.

“Are you sure you want to just give me this?” Kimock asked.

“I don’t want money.  This is straight from my heart.  Just take it out there and play it. That’s how I’ll get my joy.  Don’t worry about it.”

Kimock nodded and plugged Teak into a Fender Twin amp. He began to play. Ed Giguere stayed for a couple of hours to listen. Later, Kimock would tell people that he didn’t put down his new Cripe guitar for 72 hours.

EBONY – Ebony, the second Cripe that Steve Kimock would come to own after Adam Palow, took a slightly different if equally charitable, path into the hands of a musician who already had ‘too many guitars,’ including the beloved Teak which he would continue to play onstage for years after the successful Other Ones tours in 1998 and 2000.

By 2005, Kimock, whose Dead connection goes back to his first professional gig in the Heart of Gold band fronted by the just-departed keyboardist and vocalist combo Keith and Donna Godchaux, fell out of the Dead’s orbit, and with it, perhaps, some of Garcia’s shadow. Instead, putting time into KVHW, the Steve Kimock Band, and an occasional Zero reunion gave ample time to give Teak a workout. 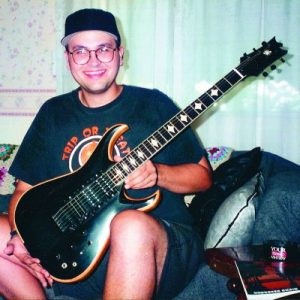 While working one of those tours with his old friend, Giguere happened upon an eBay listing—holy Cripe! he might have exclaimed. Adam Palow, at the point of needing to unload some of his own gear, had put Ebony on the internet reseller site. Giguere got on the phone to Palow: “I don’t know who will end up buying it, but it needs to get in Kimock’s hands.” Steve Cripe’s old friend Adam agreed.

Ebony & Ivory, as it was known by Cripe, features a maple core with ebony top and back, laminated ebony, maple and rosewood neck, 22 fret ebony fretboard with recycled ivory inlays, laminated ebony headstock, black Schaller bridge, Grotoh tuners, natural, burnished finish and delivers a warm yet bright and distinct sound. It is another beautiful instrument shaped by the hands of Steve Cripe, heavy and distinct, all twelve pounds of it.

Luckily, Giguere had a benefactor at hand. Janice Wulf had always wanted to buy Kimock a guitar, but wasn’t sure if the Cripe was the right one, or if it was the right price. Giguere offered to go in on the gift, and the sale was made.

Only one problem—the box arrived with an enormous hole torn in it from what had likely been a thrust from an errant forklift. “It missed the guitar by about a hair. Adam, who had packed it well, gave the shipper some real grief over it.” 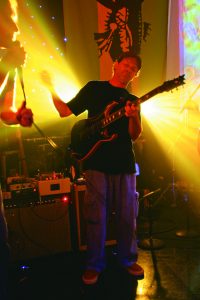 The guitar, thank heavens, was fine, and Wulf would present it to a shocked and gratified Kimock at San Francisco’s famed Great American Music Hall. He began playing it that night. Wulf, herself a musician who had a chance to play Ebony, said of it, “That guitar has amazing sustain. You hit a note and it resonates for the longest time. I’ve never played anything like it, and I’m sure I never will.”

Kimock, who feels that the two guitars, constructed of different materials but with similarly fine craftsmanship, are ‘completely different’ instruments and thus not a redundancy in his arsenal. He said of his Cripes: “The Teak guitar is basically a paintbrush, and the Ebony guitar is more of a knife. I prefer the Teak through a cleaner amp because I think it has such a unique tone all by itself, and I like to hear that. I don’t like to have that too mangled. The Ebony is one of those guitars that just rocks if you are playing it clean or with a bunch of distortion.”

Both of the customarily-heavy Cripe guitars, he also said, are “exceptionally well balanced” ergonomically. “They present themselves on the strap both standing and sitting equally well. They are really both a joy to play.”

LEGACY – Kimock, who would have opportunities to play several of Garcia’s Irwin guitars, was asked about comparing them to his own Cripes:

“I thought the Irwin’s were all just sort of heavier guitars. They felt big and they were more ornate in a lot of ways. Of course there were similar neck-through characteristics. Jerry had kind of an odd setup on the things. Action was pretty high and there was a lot of relief in the neck on all those instruments. That kind of leads the charge in terms of your impression of the instrument and I don’t set my guitars up like that. Garcia usually used lighter strings and higher action and I use heavier strings with slightly lower action, on those guitars at least, and prefer having the neck a little straighter.

“On the question of Steve Cripe’s legacy, Kimock offers a thoughtful answer: “Building those guitars for Garcia, and having him adopt them as his main instrument, I don’t think you can ask for more than that.” As for his own role in keeping the Cripe legacy, and legend, alive, Kimock continues to play and enjoy the guitars. What better compliment could be paid to a man who dreamed, truly, of only one achievement he didn’t live to make: learning to play the damned things himself. At least we can hope that somewhere, Steve Cripe can hear the happy fingers of people like Steve Kimock, who continue to enjoy the luthier’s work a quarter-century after his death. Just as music lovers everywhere continue to dance and appreciate the music of artists like Jerry Garcia and Steve Kimock, Cripe’s legacy of work, limited in number but unsurpassed in quality, is indeed built to last.

Early iteration of Teak with two-pickups