As any wood-joining luthier well knows, the quality of the source materials, both in a physical and often spiritual sense, affects the resonance of the final product as much as the engineering. Steve, acknowledging how Garcia and the Dead seemed concerned enough to be politically active over rainforest preservation, sought to ensure whenever possible that the exotic materials he used in his workshop were repurposed rather than fresh harvested. He had come into possession of an Indian rosewood bed frame, mahogany planks being used as ramps at a mechanic’s garage, along with numerous other remnants primed for manipulation by a kind of alchemist seeking transubstantiation. 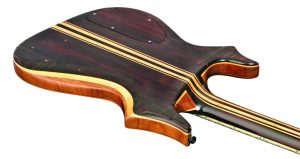 Cripe fashioned the neck and center block construction on the instrument that would become known as ‘Lightning Bolt’ to its maker and fans (while Garcia and the Dead crew referred to it as ‘Florida’) from a black walnut core with contrasting rock maple, ‘melting’ the wood into into a nine-piece laminate. The Fender-length fretboard would come from Brazilian rosewood and feature a compound radius and 24 jumbo frets. Last, the carved top, back and headstock veneer were crafted from the East Indian rosewood.

As for the iconography of the instrument, in Steve’s own words: “My logo, an exploding firecracker, is inlaid in the headstock. The lightning bolt itself is mother of pearl surrounded by [African] padauk (also known as vermillion), tinted maple and rosewood,” as quoted in an interview. 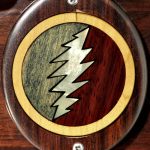 The bed from which the Indian rosewood had been reclaimed came, it was said, from a Miami opium den—who could say what spirits were carried in the organic material, how far it and the other wood had traveled from its prior life as a living being of the earth to the moment of becoming (in the right human hands) a music-spewing guitar? In any case, the finished instrument gleamed with beauty, with the immediate result being that its maker believed his work worthy of resting in Jerry’s hands.

The electronics, Steve thought, were guesses as much as the construction of the body and neck, but he had enough guitar knowledge and advice to get the instrument wired and ready to play. The bridge, tailpiece and tuners are Shaller.

The only question would become how to get Lightning Bolt to the Dead’s offices in San Rafael, California, where Jerry would presumably give it the time of day.

Stephen Cripe, an innocent in the ways of celebrity access, made inquiries of various music magazines about how to ‘get in touch’ with the Grateful Dead. No reply; no surprise. That was no way to get through the veil, but you have to start somewhere.

Networking would pay off. After talking about the guitar to a friend who worked for a music distributor, a friend of that friend was acquainted with Harriet Rose, co-founder with her husband Artie and mandolinist David Grisman of the Acoustic Disc record label through which a number of Garcia collaborations had been released. Jerry and David went way back—they had played together in Old & In The Way, the bluegrass combo who brought this thread of American roots music to masses of new listeners on their live self-titled 1975 release, the biggest selling such recording in the genre’s history.

In Steve’s words: “After my friend convinced Harriet that I was not a lunatic (that’s not completely true), she agreed to accept the guitar and give it to Jerry when she saw him. That part was painless.” But next, a long month or two of waiting.

At last: “About five or six weeks after I sent the guitar, Grateful Dead publicist Dennis McNally called and left a message on my answering machine. He said that Jerry was ‘fiddling around’ with the guitar and was intrigued by it. He also mentioned that this was a good sign. The next day, Harriet called my friend at the distributor to say that Jerry loved the guitar. Needless to say, I was excited.”

About a month later, in August of 1993, Steve Parish, Jerry’s guitar tech and right-hand man, called to ask questions about the instrument—a lot of questions. That’s when the guitar became named “Lightning Bolt.” Apparently Jerry would always call it ‘Florida’—remember, people sent him guitars all the time, and this one came from the southernmost state. To him it would be Florida, at least until it became ‘Florida 1’. That’s because Parish didn’t just call with questions and praise: Jerry liked Lightning Bolt so much he asked his guitar tech to place an order for a second Cripe guitar. Considering that Cripe had no specs on what Garcia liked about the Irwins, had had no prior customers and no guitars sold, what happened with Lightning Bolt might seem like a minor miracle. To the luthier, however, it was merely luck.

By the 1990s, the Dead were grossing $50 million a year in touring revenue; the raggedy band of anachronistic hippies now and forever epitomized rock’n roll at its most epic scale.

Despite appearances, on one level the band had always been exemplars of a particularly unique brand of professionalism by offering technical excellence and precision in delivering their musical performances to listeners. Shaggy, iconoclastic hippies ‘wallowing into another decade’ as Garcia would put it, but from that tribe grew such achievements as the Wall of Sound. The true roots of the band were not in the hippie Haight but down the peninsula in Palo Alto, where the internet was born.

Indeed, Steve’s attempt at fashioning the electronic guts of Lightning Bolt were rudimentary compared to Jerry’s typical standards, and would be swapped out before the guitar made its debut onstage. In particular, the logo was removed by Gary Brawer and made into a plate. Then, a battery would be installed beneath the embossed Bolt plate, a detail the maker could not have gleaned from only seeing images of Tiger or Rosebud, Jerry’s most commonly played Irwin guitars (with the Wolf still sometimes peeking out from backstage). Have no fear—the Bolt, the powerful Dead-specific symbol chosen by the luthier, would be returned to its placement of honor.

Only a few months had passed since Steve Cripe got the crazy notion of building an instrument for the hippie master on another coast. And yet there it now was, in Jerry’s hands. Do crazy dreams come true? Sometimes.

When the first notes of ‘How Sweet It Is’ rang out from Lightning Bolt/Florida at an August 1993 Jerry Garcia Band show, it inaugurated, in a sense, a period that would become the final two years of Garcia’s life. A couple of weeks later, the guitar would appear onstage with the Grateful Dead inside a stadium filled with tie-dyed revelers, spinners, tapers—the faithful, as Steve Cripe himself would say. Deadheads responded with a joyful noise to the chords of “Here Comes Sunshine” emanating from Jerry’s guitar. Most probably didn’t even notice it wasn’t one of the familiar Irwins, not from far enough away. 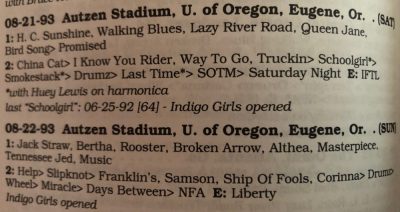 Lightning Bolt’s debut would represent only the beginning of a wild ride of attention for its maker. Deadheads are nothing if not exacting in their scholarship over the band, even down to the minutia of the tech gear. According to Cripe “98% of Deadheads probably thought it was another Irwin,” but after the Eugene and Shoreline shows, those paying close enough attention had one burning question—what’s the deal with Jerry’s new guitar?

While no mention of Lightning Bolt seems to appear in reviews of the August 1993 shows, by the time the Dead rolled across country for the customary East Coast Fall Tour it was clear Jerry was laying down his licks on a new guitar.

A member of a particularly studious Deadhead subgroup, the amateur recordists who propagated band-sanctioned recordings made from a special section in the audience near the soundboard known as ‘tapers,’ recalls noticing Lightning Bolt from the first notes of the Philadelphia Spectrum run of shows in mid-September. “Whether it was the new guitar or the up-to-the-minute hardware recently installed in Lightning Bolt, Jerry had a different sound going on that tour,” recalls James D. McCallister. “It was bright, airy at times, almost acoustic in newer Americana-style tunes like ‘Lazy River Road.’” 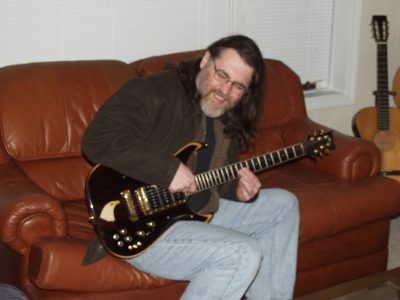 Indeed as Cripe himself asserted, at first McCallister assumed the instrument was a new Doug Irwin, at least until the next year when word got around. That’s when the Deadhead press came calling at Cripe’s doorstep to hear the story of what by then were the two new Garcia guitars, and a viable new business for the craftsman began to emerge from the notoriety.