8. Brokedown Palace – Picking Up the Pieces

“All the birds that were singing, have flown except you alone” – Robert Hunter

Steve’s friend Adam Palow, a fellow craftsman (albeit of amplifiers), would visit Trilby a few weeks after the accident. Guitars had been finished, partially finished and in-progress Masterpiece destroyed, but he described seeing the potential for many instruments to come. “There were all sorts of slots for the necks already cut at the right angle, ready to be glued and clamped. Body pieces.”

Theresa told him the story, sounding the way one does after a tragedy: rote from recounting the facts in various levels of detail to friends and loved ones. Palow was struck on his visit not so much by Steve’s guitar craftsmanship—that he knew well, having played several of the guitars. It was the decor of the home, rather, that drove home the true level of imagination and craft Steve Cripe put into the fine objects he chose to transmute into existence from their origin as living pieces of nature.

“At least half the furniture in the house had been handcrafted by him. The guitars themselves describe what he was capable of, but to see it in other forms was spectacular.” Palow would begin feeling an urge to do more than marvel at his late friend’s craftsmanship, but as he stood admiring Tribute (AKA Saturn) and Eagle, he made the decision not simply to remember the guitars, but own them.

With respect to the remains of Steve Cripe’s various unfinished projects, including special orders from paying customers, the O’Donnells, with their Resurrection Guitars, would prove to have chosen a prophetic business name.

While Steve had not begun the actual work on the two client orders he had cooking, the deal had been struck for one, with design and specs-talk ongoing with the other. At Theresa’s behest Pat would contact those clients and complete the work Steve had all-but begun. Pat felt an obligation to finishing his friend’s work, and knowing the wood, along with Steve’s approach, allowed him to feel he could produce instruments like the clients had envisioned, but in the style of the late luthier to which they’d turned after seeing the quality of his work.

“I told [the client] I could do it along the same lines as Steve would have, so he gave me the go ahead. Also, there was repair work on some stuff, and [projects] Steve had started that had not been sold. Theresa was having a really hard time with it all.” 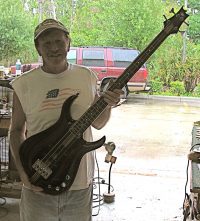 Pat O’Donnell with the only bass made by Cripe.

The surviving unfinished guitars included Cripe’s single attempt at a four-string bass, a rare misstep in his post-Garcia work. Hammer remembers Steve mentioning “something about a glue joint failure,” or else the bass was simply never fully assembled.

Pat O’Donnell, who with his son Tim was best positioned to help Theresa sort out the material remains of Steve’s work, would take possession of the remains of the various projects, including a store of unworked lumber “like any craftsman would have lying around” to the incomplete bass, which had been abandoned in two pieces.

“Initially I only found the lower bout [body],” but on a subsequent trip Pat would find the upper bout and the neck in one of the storage barns. Square and un-carved, Pat could nonetheless see what he wanted to do “because of the way the wood was laminated.” The neck was complete, but not the head. “Tim carved the top of the guitar, and the dyed wood [Cripe had used] gagged him.” 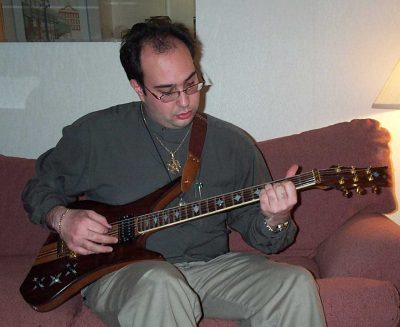 While a challenge to complete and far from finished during Cripe’s lifetime, no question that the instrument the O’Donnells would manifest remains a luxurious showcase piece of work, and yet another tribute to the talents and vision behind Cripe Guitars.

Firecracker (or Workingman’s Guitar, as Hammer says Cripe referred to it), is constructed of a teak core with coiled cocobolo top and back, a laminated teak, maple and purpleheart neck, a laminated headstock, 22 fret East Indian rosewood fretboard, gold-plated Schiller tuners, and a Floyd Rose tremolo.

Wired like a Les Paul, but with an additional phase reversal switch.

The guitar delivers a warm-to-medium-bright sound.

Firecracker is owned by a collector in California, who acquired the guitar directly from the Cripe family in 2001.

Another unfinished guitar was Headless, Cripe’s intention to build, as its name suggests, with the tuning knobs placed at the opposite end, in the lower bout.

“This one Steve built and I finished it. That wood was so hard to sand—it had an obnoxious smell!”

The instrument features a walnut core with a special resin pressure treatment that resulted in a silvery black color. A naturally polished, durable finish, the material is commonly used in knife handles. The neck is maple with purpleheart laminate. Years later Resurrection Guitars would sell the piece to another Florida local, ‘Iron Dan,’ who plays it still.

What kind of wood do you think “Headless” is made out of?

Pat: It’s wood that’s made like a skateboard.   It’s got that very thin lamination instead of glued together.  Before they are glued, they are all dyed a different color.  The Cripe Bass is made that way as well. It’s a dyed wood.  It could be birch or it could be maple…

Did you build this, or did Steve?

Pat: This one Steve built, and I finished it.  It wasn’t finished. Yeah, it was kind of fun to play.  This stuff was so hard to sand.  It has this obnoxious smell when you sand it, the chemicals used, that is.

After six years together, Steve would introduce Theresa as his wife, and most, including people like Hal Hammer, assumed at first that they were married. As it turned out they weren’t, but along with all his other plans, Cripe had looked into doing something about that situation, including making out a will.

Such a document turned out unnecessary, and in a generous gesture Steve’s parents gave the property and possessions to his common-law widow. As Theresa proceeded to pick up the literal pieces and the O’Donnells completed the projects, word of Cripe’s work spread among guitar collectors. Pat would take Theresa to shows like NAMM in Nashville, where they set up a booth with the instruments still in her possession. “We’d sit there and tell the story of Steve, the guitars, and what happened.”

The acoustic guitar, not-quite finished, would end up finding a charitable home. Theresa loved coming over and hearing Tim O’Donnell play Steve’s guitars, as well Tim’s friend Doug Macrae and his band Stonehouse. When she heard that Doug was in dire need of a new instrument, she bade Pat and Tim to complete the guitar and gift it to the local musician. With Steve’s dad in agreement and the acoustic only needing minor details finished, Pat did the work in time that evening for her to present it to an astonished Macrae during the set break of the concert. “It’s a really good sounding acoustic,” Pat recalls, and being gifted to a talented and worthy musician made for a moving, loving tribute to both the instrument and its maker. 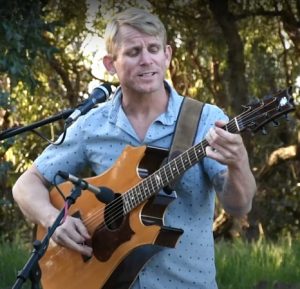